Joe is the General Manager of Mohegan Sun Casino Las Vegas, currently being developed in affiliation with Virgin Hotels Las Vegas, the Hilton Curio Collection and the resort’s owner, JC Hospitality. Joe brings substantial hospitality operating experience to Mohegan Gaming & Entertainment’s first venture in Las Vegas.  He is the former chief operating officer of a predominant Las Vegas locals’ portfolio of casinos, resorts and taverns, where he directly managed multiple businesses and their teams of people in the Las Vegas valley over the past 15 years.  While managing day-to-day operations at one of those resorts, Joe and his colleagues were featured on the Discovery Channel’s and Travel Channel’s “American Casino,” taking prime time television cameras behind the scenes of the casino resort. Look for Joe featured as “The Boss” in this no-holds-barred reality TV series, now airing in perpetuity, thanks to television re-runs and social media channels.

Joe was formerly a general manager of multiple resorts at the South Shore of Lake Tahoe where his teams were repeatedly awarded Four-Diamond recognition by AAA Travel editors, recognizing both lodging and restaurant superiority. In a survey of the readers of Strictly Slots, Joe’s Lake Tahoe team scored an unprecedented first place vote tally in every guest survey category measured.

He began his gaming career in Atlantic City (NJ) where his assignments included Hotel Director, Controller and Audit Director.

While working in his hometown, Joe was awarded the parent company’s nationwide Chairman’s Award, recognizing highest honors for innovative and excellent customer service.

Joe is a former Certified Public Accountant. His CPA practice was with Deloitte (formerly Haskins and Sells) in Philadelphia and Atlantic City. He is a past member of the board of directors of the North Las Vegas Chamber of Commerce and the Henderson Convention Center and Visitors Bureau, and he is a former leader of the Lake Tahoe Visitors Authority, the Lake Tahoe Gaming Alliance and the Laughlin Chamber of Commerce. He also served on the board of the Hospitality Federal Credit Union in Memphis, TN. Hasson is a graduate of Rider University (formerly Rider College) in Trenton, NJ, where he earned a Bachelors Degree in Commerce.

Joe, his wife and children first relocated from the east coast to Nevada in 1998. 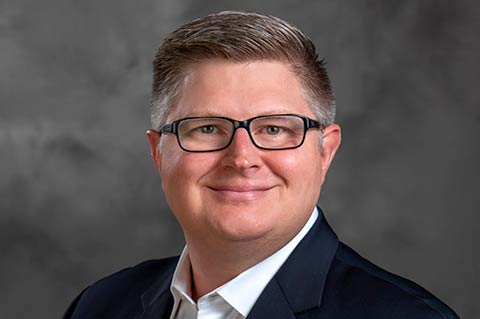 Tyler Conover is the Director of Marketing for Mohegan Sun Casino at Virgin Hotels Las Vegas. He is marketing professional with over 15 years of experience in the gaming and hospitality industry. He has been working in and around Las Vegas since 2017. Before Las Vegas, Tyler held a varying of marketing roles in regional markets such as Southeast Louisiana, Northwest Indiana/Chicagoland, Southern Indiana and he has worked as a marketing consultant throughout various regions of the US and Canada.

In his role as Director of Marketing for Mohegan Sun Casino Las Vegas, he will oversee all marketing initiatives revolving around the gaming database and direct marketing, loyalty marketing, advertising, promotions and special events.